#2 – DOCTORS AND LAWYERS: SURVIVAL! Are You a Ticking Time Bomb?

Written by Dr. Lila Wolff-Wilkinson on September 23, 2015. Posted in Performing Your Profession Blog

Q: What’s the difference between actors and psychotics?

A: Actors step out of character at the end of the play. Psychotics can’t leave the role.
By that metric, what’s the difference between some lawyers and doctors and psychotics?

Lessons from the theatre:
Actors learn to play in “given circumstances” – context. You can’t play an action from a play other than the one you’re in now. When the play ends, actors “molt” the character they’ve just played by removing makeup/costume. This ritual separates PROFESSIONAL from personal persona, character from actor.

The PROFESSIONAL MASK/PERSONA (upper case) is powerful, seductive, comfortable to stay in. But if you wear it home, you’re staying in character when the play’s over, playing in the wrong context. Stressful. Crazy-making. Yes, it can be hard to switch to the personal mask/persona (lower case) when you go off-duty. But actors do it every day. 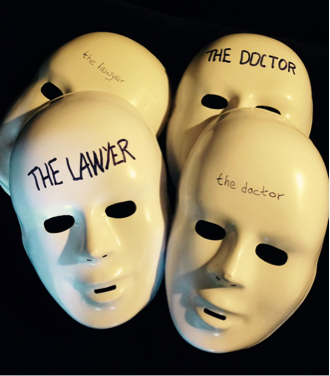 Doctors and lawyers can learn this transferable skill. Performing Your Profession culminates in separating PROFESSIONAL and personal masks, learning to play in the play you’re in, not the one you were in before. Leave THE LAWYER and THE DOCTOR masks at work. Put back the lawyer and the doctor masks when you leave the office. Defuse the bomb.

NEXT: “What does my character (persona/mask) really want in this scene?”